Kenley Common offers the most intact fighter airfield associated with the Battle of Britain, wildflower-rich meadows and ancient woodland. At its height, roughly 1000 service personnel were stationed at RAF Kenley and there are still a significant number of structures remaining from that historical period on the Common.

Today, many of these have become some of the youngest scheduled ancients monuments in the country and stand side-by-side with acres of chalk grassland and traditionally-managed coppice. For the avid aviation or history buff there are visible heritage features abound.

The Kenley Revival project, supported by a Heritage Lottery Fund grant, has been active in the promotion, conservation and documentation of Kenley's military heritage.

During medieval times, Kenley Common and Riddlesdown formed part of the waste land of the Manor of Watendone. The soil was by then too poor to grow crops, make hay or even coppice woodland. The only economic use was therefore as pasture to graze livestock.

Commoners had legal rights to gather fuel, livestock bedding and roofing, as well as rights to graze. The City of London bought the land from the Lord of the Manor, Edmund Byron, in 1883 alongside the other Coulsdon Commons.

In 1917 the Common and adjacent farmland was requisitioned for an airfield where aircraft were assembled and tested before being flown to the Western Front.

After the First World War the northern part of the Common was returned to the City Corporation but the southern part was kept for the airfield. To make up for this loss, farmland overlooking Whyteleafe was transferred to the City Corporation and agreement made that other land would be given back to the Corporation if it was no longer needed for military purposes.  This has happened around the airfield, outside the perimeter track, which is now looked after as Kenley Common.

War damage to the Common was made good in the 1940s and in the early 1950s fields were hay cut and some areas grazed by Jersey cattle and ponies. However, much of the chalk grassland on the steeper slopes where haymaking was difficult, became overgrown with shrubs and trees. It wasn't until grazing was reintroduced in the 1990s that there was an alternative means of managing this area and were able to restore open chalk grassland here.

Today, the Second World War features of Kenley Airfield are the Common's most valuable historical remains. The surviving blast pens, eight of which lie on the Common, are protected as Scheduled Monuments by Historic England. Special conditions apply as to how they should be maintained or restored.

The Kenley Tribute was built and dedicated during the Millennium and is the focus for Remembrance Day wreath laying and other commemorations. The whole of the original Second World War airfield is a Conservation Area. 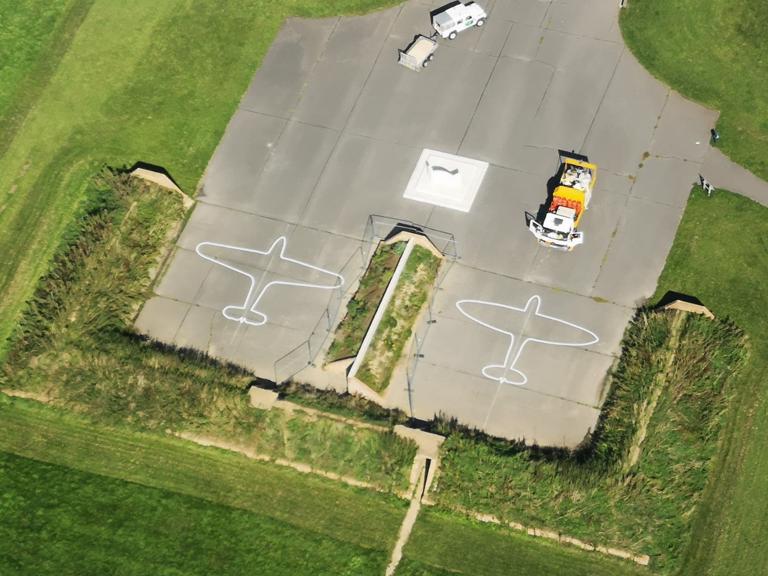